A geological wonderland, the Giant’s Causeway in Northern Ireland still mystifies scientists as to its formation.  Their explanation is a volcanic eruption millions of years ago formed the unique rock formation that sits on the coast today.  But Irish folklore tells a different story about the rocks.  This is where the Irish story of Finn MacCool was born.

As our tour approached the Giant’s Causeway our tour guide told an amusing tale of one of the legends of two competitive giants who lived across the narrow stretch of water from each other.  One lived in Ireland, Finn MacCool and the other in Scotland, Benandonner.

As the Irish story goes, the Irish giant named Fionn MacCumhain (aka Finn MacCool) had an ongoing feud with his Scottish counterpart, Benandonner.  They would insist on continually shouting at each other over the Sea of Moyle.  At one point Finn threw a handful of dirt at his foe which fell short and ended up in the sea to form what is now called the Isle of Man.  The causeway was built because the Scottish giant could not swim so Finn wanted to make it easy for Benandonner to come and fight him.  Coincidentally there is a similar shaped causeway on the Scottish side because the two countries used to be closer together. 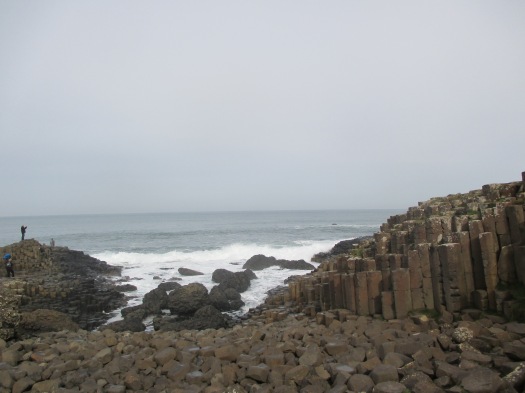 So one day Benandonner crossed the causeway looking for Finn to take him up on his challenge.  When Finn saw that the Scottish giant was bigger than him, he came up with an alternative plan with the help of his wife.   When Benandonner got to Ireland, Finn’s wife Oonagh was at home with the baby.  Little did Benandonner know that the baby was Finn in disguise.  Benandonner took one look at the full size “sleeping baby” and froze in horror.  At that, he turned and ran back to Scotland thinking if that was the baby then how big would the father be.  As Benandonner ran across the causeway he destroyed part of it in his wake to ensure that Finn could not come after him.

Today, the causeway attracts many visitors each year all coming to see for themselves this magical, geological rock formation that was, according to Irish folklore, built by the giants.

One Reply to “A Tale of Two Giants”

Storytelling through words and art